6 Fundamentals of Chef Workflow that you should know

Chef Workflow is a tool built by Chef for Continuous Delivery of applications and infrastructure. It provides facility for automated testing and deployment.
Chef Workflow has a shared pipeline model. Every change has to go through some predefined phases of the pipelines prior to getting released. These phases are customizable. So when you push your changes to chef-workflow, your code is tested automatically, reviewed (which is done manually of course) and then delivered.

A pipeline is a series of automated and manual quality gates that take software changes from development to delivery.
Chef Workflow pipeline is made up of 6 stages: Verify, Build, Acceptance, Union, Rehearsal and Delivered.
The diagram below explains it:

Each project has associated Verify, Build and Acceptance stages. Verify and Build stages perform tests on the source code.
Union, Rehearsal and Delivered are a part of Shared Pipeline. They test the releasable artifacts.

It includes the stages which are unique per project. A developer has control only till the “Project Pipeline”. Here you push your change, someone reviews and approves it and then the code is shipped to the Shared Pipeline.

Build stage has some additional phases:

There are 4 phases in Acceptance stage:

“Shared Pipeline” is automated by Chef Workflow. It runs the test cases for every stage, tests the cookbook/application by VM provisioning and if all stages are passed then the code gets merged into the desired branch.

Each pipeline stage consists of some phases. The diagram below explains the phases in each stage: 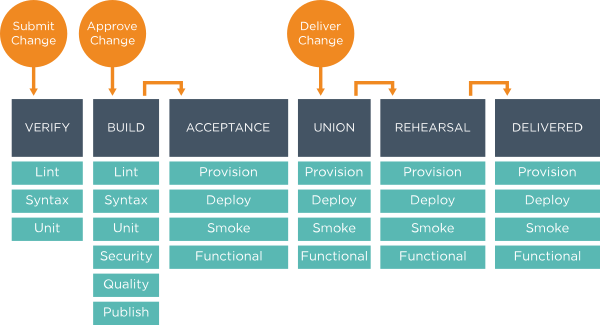 These phases are customizable. What happens in each phase can be defined in the Build cookbooks. Each phase is configured with a recipe in that cookbook. Build cookbooks can also be used to define what kind of artifacts to build and where to store them.

The build cookbooks reside on Chef Server which decide what happens in each phase. Each build node is registered with the chef server and the phase jobs run on them. It’s better to have 3 build nodes so that lint, syntax and unit phases can run in parallel.
For each deploy-able stage of chef workflow (acceptance, union, rehearsal and delivered), there is a web accessible server where you can verify your changes pushed through pipeline. Server names are as per the stage i.e. Acceptance, Union, Rehearsal and Delivered.

Login with your Social ID
Chef