Make Your Docker Setup a Success with these 4 Key Components

Building a web application to deploy on an infrastructure, which needs to be on HA mode, while being consistent across all zones is a key challenge. Thanks to the efforts of enthusiasts and technologists, we now have the answer to this challenge in the form of Docker Swarm. A Docker Container architecture will allow the deployment of web applications on the required infrastructure.

As a part of this write-up, I will run you through Docker Setup while emphasizing on the challenges and key concern on deploying the web applications on such infrastructure; such that it is highly available, load balanced and deployable quickly, every time changes or releases take place. This may not sound easy, but we gave it a shot, and we were not disappointed.

The Docker family is hardly restrained by environments. When we started analyzing all container and cluster technologies, the main consideration was easy to use and simple to implement. With the latest version of Docker swarm, that became possible. Though swarm seemed to lack potential in the initial phase, it matured over time and dispels any doubts that may have been expressed in the past.

Docker swarm is a great cluster technology from Docker. Unlike its competitors like Kubernetes, Mesos and CoreOS Fleet, Swarm is relatively easier to work with. Swarm holds the clusters of all similar functions and communicates between them.

So after much POC and analysis, we decided to go ahead with Docker, we got our web application up and running, and introduced it to the Docker family. We realized that the web application might take some time to adjust in the container deployment so we considered revisiting the design and testing the compatibility; but thanks to dev community, the required precautions were already taken care of while development.

In total there are 10 containers deployed which communicate with DB nodes and fetch the data as per requirement. The containers we deployed were slightly short of 50 for this setup. Docker UCP is an amazing UI for managing E2E containers orchestration. UCP is not only responsible for on-premise container management, but also a solution for VPC (virtual private cloud). It manages all containers regardless of infrastructure and application running on any instance.

The application is configured to listen in on port 8080, which gets redirected from the load balancer. The URL remains same and common, but eventually, it gets mapped to the available container at that time and the UI is visible to the end user.

Following is the high level workflow and design: 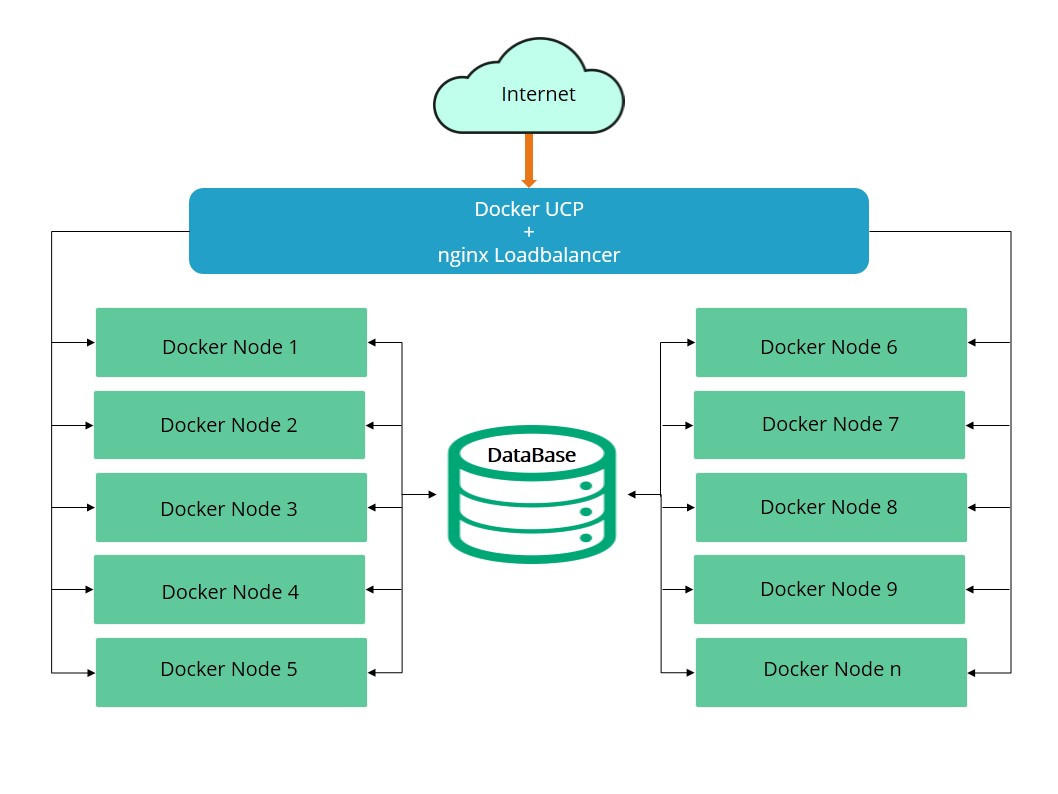 Login with your Social ID
docker