Today, software development is no longer what it used to be. In the past, you had only one or two platforms to consider while developing software applications. Also, code releases and new versions used to come out once in a year or so. Testing was a relatively relaxed process. Today, we have a plethora of operating systems in both mobile and desktop platforms. In the mobile world, you have Android, Apple iOS, Windows Phone, and BlackBerry. Although BlackBerry and Windows Phone occupy a diminutive slice of the market, you still can’t ignore them. Software testing assumes great importance in the case of agile development where coding is a continuous process.

Quality Assurance of Your Apps

Imagine your bank provided an Android app for such activities as net banking and funds transfer. During development, the bank tested the app only on the Samsung Galaxy family of devices owing to the fact that it was highly popular. Hence, when you open up the app within your Nexus 5, it provides ineffably bad performance with such UI faux pas as invisible buttons, overlapping text boxes, and misaligned menus. You can imagine the poor user experience it would give you. The bank cannot expect all of its users to have Galaxy phones, can it? Android is a serious challenge for testers due to its many versions, and it is adopted by many OEMs in a multitude of hardware configurations. As Android is a free, no-strings-attached operating system, OEMs go out of their way to modify it, developing their own user interfaces. While this freedom proved to be one of the reasons behind the enormous success of Android, it also made the OS flavors incredibly diverse.
This device diversity makes testing an Android app an intricate task. Had your bank done proper testing on your Android app with the help of an emulator and a test automation suite such as Mobitaz, the app would have been much better.

There are mainly two types of software testing: white-box and black-box testing. The difference between them is minor. In the black-box method, testing is based on the output generated across a range of inputs submitted; in essence, the internal code structure is not evaluated. In white-box testing, aka glass-box testing, the tester takes into account the internal mechanism of the software. Besides these, there are a number of areas a software tester needs to take care of: functionality, system, stress, performance, etc. All these different types of testing ensure that the application runs smoothly and provides all the functionalities expected.

Testing in the Android World

Android app testing may be a little more complex than testing desktop applications. As mentioned earlier in the case of the banking application, the tester needs to take care of a huge number of devices. Look at the diversity in the Android market as of February 18, 2014. 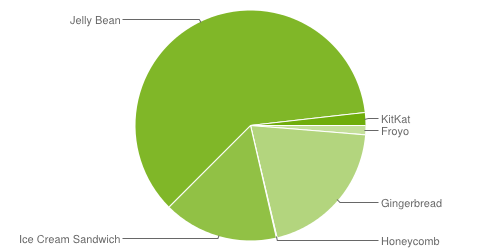 Android devices, although very sophisticated, do not provide the level of performance of a laptop or a desktop computer. Hence, performance testing of your app is very important. What if your app slows down the entire system thereby frustrating the users?
Also, some additional testing methodologies, such as regression testing and unit testing, assume importance in the case of Android apps. Regression testing is a method in which a modified component is tested for its effect in the entire system. Unit testing is done on a single unit or a group of related units. A unit may be one or more software components grouped together.

Businesses Depend on Software Testing

If you are into software development, your aim should be to bring your application to the market faster than your competition does. Also, you cannot afford to offer a half-baked product. Your agile development and testing teams have to work hand in hand in order for the app to be stellar in every aspect. A tool to automate the testing of your app may spell the difference between failure and success in such scenarios.
Especially in mobile app development, where the competition is extremely hot, you really need to bring your app out fast. In such cases, an excellent test automation solution is a necessity.

Android is an operating system that enjoys continuous development. New features are added continually. Your app should be capable of taking advantage of this aspect of Android. Multi-touch gestures are one such feature that many test automation suites failed to incorporate for several years; however, Mobitaz supports it as well as other difficult-to-automate components as found in hybrid apps. MSys’s Mobitaz has been quick to catch up to the market with all the necessary features of a robust test automation solution.

Modernization of enterprise apps development is essential for any IT organization. This white paper gives an industry perspective on this.