Internet of Things: What the Future Has in Store!

Imagine your washing machine calling on your smartphone and telling you in a Siri-like voice that it’s time to wash your socks. Imagine you receiving texts on your phone about your garage door being left open, your car out of fuel, or your toaster finishing its work. In the near future, this may no longer be science fiction; it is very much possible that any object you have in your home will start talking to you–in fact, not only to you but to any other objects around. What enables this is a technology known as Internet of Things (IoT).
What is this revolutionary new technology? What is Internet of Things? This term has existed and been hackneyed since the early ’90s so as to breach the boarders of cliché. People have come forward with certain other terms to substitute “Internet of Things,” but most of them turned out to be just bush-league. Internet of Things refers to a future in which your commonplace objects—things that you normally do not associate with technology—start to communicate as part of a network. This concept radically augments our idea of the smart planet, because you can communicate to not just computers but every object in your home over the Internet.

IoT and the Fascinating Future

If you are a fan of popular sitcom Big Bang Theory, it has an interesting episode in which the characters light lamps and turn down stereos using their laptops by sending signals across the Internet. After a while, by giving open access, unknown people start playing around with the lamps in their apartment. This kind of development is highly invigorating as well as slightly intimidating for many people.

While on one side people are talking about the advantages of IoT, a discussion is looming large on the horizon about the security concerns surrounding the concept. For instance, what if the bad guys hack into your smartphone to disable your home’s security system and open the doors of your house while you are away in Hawaii on a vacation?

One area IoT is going to transmogrify is the automotive industry. Already, the cars are as smart as you want them to be. A few days ago, I was watching the Audi keynote in the International CES (watch it below), and wow! The cars can not only park themselves but drive you through busy streets. The technology is that sophisticated now. Last week, Fox News published a piece on V2V (Vehicle to Vehicle) communication system that helps cars communicate with other cars in the vicinity to convey important information, such as whether or not the driver is applying breaks properly to avoid a possible collision.

The US department of transportation is considering a regulatory proposal for vehicle to vehicle communication. You can go to BBC Top Gear and be literally flabbergasted at the automotive technology that is emerging. In essence, cars have advanced through technology in the last decade more than they ever did in a century led by mechanical engineering. Embedded computing technology is at the helm of all these developments.

When IoT comes to our world, these cars will be well connected, through 4G technology. They will communicate fluently to bring assistance to you wherever you are.

Cisco has done quite a bit of research on Internet of Things (which they call Internet of Everything in their vernacular). Check out that site; it’s a goldmine of information on IoT. According to Cisco’s findings, released in Feb 2013, IoT globally will be worth 14.4 trillion dollars in the next decade. I happened to look at the data concerning our country too, and the value at stake seems to hover around 35 billion USD. When it comes to the zenith of information technology, the United States, the total value at stake seems to be 473 billion dollars.

IoT: How It Changes Your World?

I have given you a slight idea of how IoT is going to change your future in the beginning of the article. While some of the ideas may be a bit out there, there is virtually no bounds to the way applications can be developed to incorporate things. Embedded systems will be subsumed into almost every object to make it more intelligent. That’s where the washing machine that talks and texts comes in. These developments can significantly improve your lifestyle.

Just as the lot of geeks in the Big Bang Theory, IoT will exhilarate the techies amongst us. They will come up with specialized applications that do everything from garage-door-opening to toilet-seat-lifting. The way IoT can uplift the services in certain industries today is bound only by your imagination. Surveillance, security, healthcare, education, retail, etc., are some of the industries that will taste the massive benefits of Internet of Things.

There is a minor problem. And that concerns software development. For an analogy, consider today’s mobile app development. While a developer needs to concentrate on only one device (or two) in case of iOS development, he has to consider a plethora of hardware configurations, resolutions, processors, and OS versions when it comes to Android. Imagine if a developer needs to create an app that controls refrigerators or washing machines? There is more diversity there than the number of verses in the King James Bible, figuratively speaking.

This development intricacy has also been discussed by a recent podcast in GigaOM. They also discuss the rampant privacy concerns surrounding the subject. Play the podcast to listen:

How IoT redefines our world is well illustrated in this image: 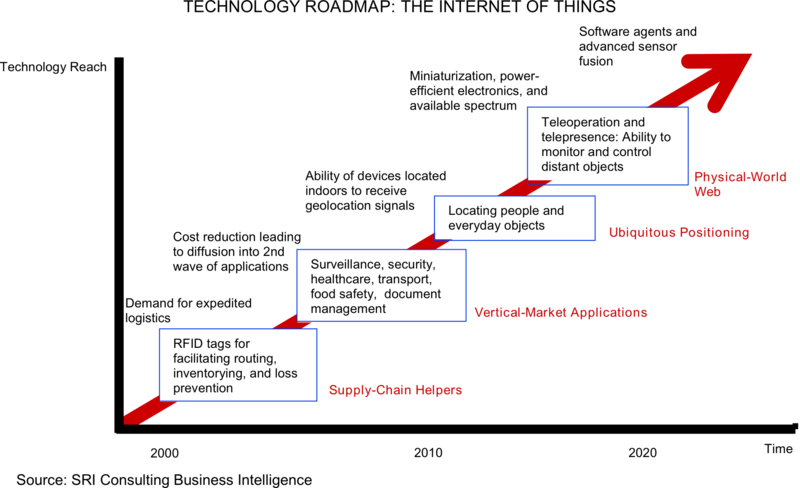 As a first step of inventorying everything to be managed better, you can use technologies such as RFID (Radio-frequency ID) and NFC to tag each object. Then, they can be managed through a network, and locating and securing the inventoried objects become a piece of cake.

There is, however, one little issue concerning IoT: the standardization. We should come up with a way to standardize the tagging technologies that we use—RFID, NFC, barcodes, or QR codes. It should not be as wayward as in the case of 4K resolutions (wherein there are six different resolutions and no fixed standard).

In essence, for coherence and congruence, everything from development to nomenclature should follow a standard.

I could go rambling on and on about IoT as it is quite an interesting topic. MSys’s development teams have expertise in embedded computing technologies, which is right there at the brink of IoT. It is inspiring to know that we are part of a global team working toward the future of technology.

Login with your Social ID
internet-of-things

The 6 Most Important Building Blocks of the Internet of Things
3 min read
Big Data and Your Privacy: How Concerned Should You Really Be?
7 min read
IoT- Beyond the Mirage
1 min read

With the advent of IoT, the data generated in the world will increase even more. This can provide business insights which are otherwise hard or impossible to obtain. Read our Whitepaper, “IoT: Capturing Insights From Huge Volumes of Data Generated by Things.”